My Journey into Ruby: Modules

Let's talk about modules in Ruby, how they differ to classes, why are they useful and how does the Ruby method lookup works.

Modules in Ruby are similar to classes, they hold multiple methods. However, the modules cannot be instantiated as classes do, the modules do not have the method new.

We can think of modules as mix-ins, they allow you to inject some code into a class. The mix-in exports the desired functionality to a child class, without creating an "is a" relationship. In Ruby, the main difference between inheriting from a class and mixing a module is that you can mix in more than one module.

The Well-Grounded Rubyist book has a really good example about when a module may be needed.

💡 When you're designing a program and you identify a behavior or set of behaviors that may be exhibited by more than one kind of entity or object, you've found a good candidate for a module.

Let's review the basics of module creation. We will use "stack-likeness" as our main example. We want to create a module that introduces stack-like behavior to any class.

ℹ️ A stack is a one dimensional data structure that follows a particular order for the operations to be performed on it: LIFO (Last In First Out), the last element to be added into the stack will be the first element to be queried on the stack.

Writing a module follows almost the same syntax that we use to create classes, the only difference is that we need to start the definition using the module keyword instead of the class keyword:

What we did here is pretty simple. We're creating an instance variable called @stack that is an array representing our stack (1D data structure we talked about above) and we then abstract the push and pop behaviors of the stack into the push and pop methods of the module.

Mixing the Module Into a Class

In order to mix the module into a class we are going to make use of one of three different keywords: include, prepend and extend.

⚠️ For this example, I'm going to show how to use the include keyword to add Stack-likeness into our class, to understand how the other keywords work we'll need to go through how the method lookup works in Ruby and we'll do that later in this article.

That's it. That's all that is needed in order to mix our Stacklike module into our Stack class, and now it can behave like a stack.

If we execute this code, we'll see that the stack behavior is currently being applied to our Stack class and the Stack-likeness behavior can be introduced to any other class that we want in our codebase, it is easily reusable.

💡 Rubyists often use adjectives for module names in order to reinforce the notion that the module defines a behavior.

The method lookup path is a mechanism in which Ruby starts "bubbling up" in the "object chain" in order to find what object or module is the one that contains the method that we're currently calling. This is what's being used when we call object.pop or object.items in our past example, those methods are not explicitly defined in Stack, but they're found in the method lookup path of the Class by including the Stacklike module.

We are creating a class (A) that inherits from another class (B) and also mixes the behavior that's provided by a module (M). Now, we can instantiate the class A and call the method X, by following the Method Lookup Path, we'll get "Hey I'm the module M" as the result. 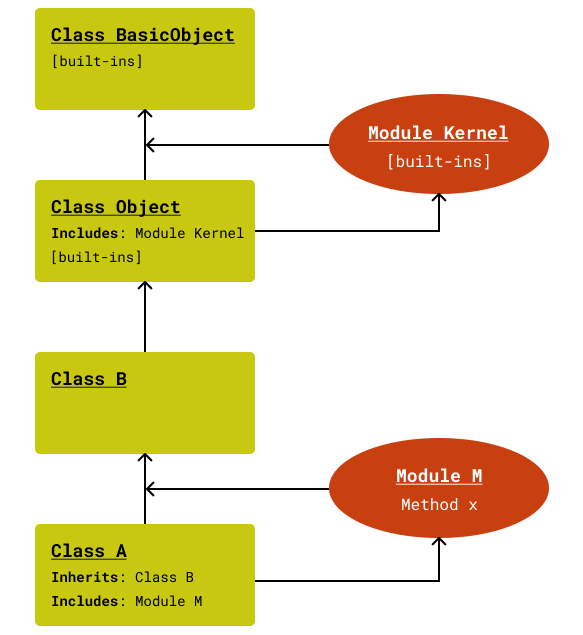 The Class A object will try to find a method to execute based on the message that has been received (x). If Ruby has looked up all the way in the object chain until it reaches out Kernel or BasicObject and still hasn't found it, then it won't be found.

ℹ️ The point of BasicObject is to have as few instance methods as possible, so it doesn't provide much functionality. Most of the functionality or Ruby's fundamental methods is actually found in the Kernel module, that are included in all objects that descend from Object.

ℹ️ If two modules are included in the same class and they both contain a method with the same name, they're going to be searched in reverse order of inclusion. The last mixed-in module is searched first.

When mixing-in the first module into the class, I told that the prepend and extend keywords could be used to that as well. Let's see the differences between them.

It works almost the same as include, the difference is that when you prepend a module to the class, the object will look for the method in the module first, before looking for it in the class.

Consider this change in the code above:

The method lookup path will change to [M, A, B, Object, Kernel, BasicObject]. 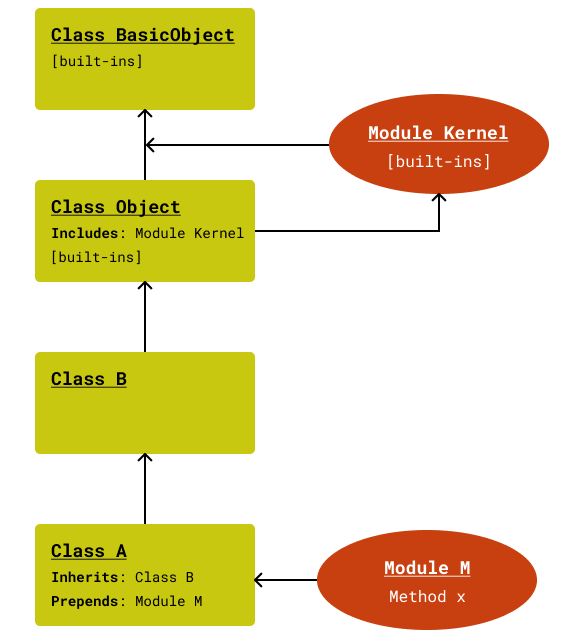 There's this keyword called super that we can use inside the body of a method definition. What this keyword does is that it jumps to the next-highest definition of the current method in the method lookup path.

Consider the following change in the example code:

Calling the method x will result in something like:

Because the super keyword is going to call the method x that is found in the Class B which is the next object that is available in the method lookup path in this example.

It's also important to note that the super keyword handles arguments in a different way as methods would do:

When to Use Mix-Ins vs Inheritance

You may like to break everything into separate modules, because you think something that you write for one entity may be useful in another entities in the future. But the overmodularization also exists. You've got the tools, and is up to you to consider how to balance them.